Fast and portable executable to run your Elm tests.

To install elm-test-rs globally, simply download the executable for your system from the latest release, and put it in a directory in your PATH environment variable so that you can call elm-test-rs from anywhere.

To install elm-test-rs locally per project, add elm-test-rs in your elm-tooling.json config file and use elm-tooling install. In such case, you'll have to run it via npx: npx elm-test-rs.

To install elm-test-rs in your CI, as well as elm and other tools, use this GitHub action.

Use elm-test-rs init to setup tests dependencies and create tests/Tests.elm.

And simply use elm-test-rs to compile and run all your tests.

Information on how to write tests is available at https://github.com/elm-explorations/test/.

With elm-test-rs, calls to Debug.log are captured and displayed in context with the associated failing test. Let's say we have the following source file.

And we have the following tests file.

Then elm-test-rs will give you the following output.

There are still improvements to be made since fuzz tests will report all their logs instead of just the logs for the reduced case, but this is already super useful for unit tests.

By default, elm-test-rs just prints to stdout the output of the tests runner, which is dependent on the --report option chosen (defaults to console report). But if you are interested in gaining more insight on what is happening inside, you can add a verbosity level to the command.

For packages authors, it is sometimes hard to check that a dependency lower bound is actually working with your package when elm-test always installs the newest compatible version of a given package to run the tests. With elm-test-rs -vv --dependencies newest in "very verbose" mode, it will tell you which version of each package was used to run the tests. For mdgriffith/elm-ui for example, it will give the following.

While if you run elm-test-rs -vv --dependencies oldest, you will get those.

By default, elm-test-rs will try using the packages already installed on your machine, but if there is something missing, it will connect to the package website to check existing versions of packages that could be used. If you want, you can prevent that second phase from happening, making it crash instead. To do that, just add --offline to the elm-test-rs command.

Note that the --offline and --dependencies flags are incompatible with each other, as you generally can't know which are the oldest or newest existing packages without asking the package site which version exist.

Check out the command help with elm-test-rs --help to know more about all its features.

Both elm-test and elm-test-rs are very similar, especially since version 0.19.1-revision5 of elm-test. However, there are still few differences. Some are small differences:

With elm-test, the module name is automatically prepended to descriptions of all its tests, meaning you can have the same description for tests in different modules. With elm-test-rs, there is no such thing, your descriptions are entirely explicit and left untouched, so you cannot compile multiple test modules with the same description tests inside or you will get a "duplicate test name" error. To understand the reasons of this choice, please have a look at that GitHub issue.

The easiest way to fix such "duplicate test name" error is to create a new Test.describe level for the corresponding modules, tranforming

Since elm-test-rs enables multiple levels of verbosity, that additional logging goes to stderr. Therefore, to avoid mixing the report output stream and logs, reports go to stdout. This applies to reports of running tests as well as potential error reports of compilation. In contrast, elm-test json report outputs to stdout when running tests, but stderr when compilation fails since it forwards the compiler json output, itself in stderr.

In addition to new useful features, elm-test-rs aims to be easy to maintain and to extend. For these reasons, the core design goals are for the code to be

The code of this project is split in three parts.

Rust was chosen for the first part since it is a very well fitted language for systemish CLI programs and enables consise, fast and robust programs. But any other language could replace this since it is completely independent from the supervisor, runner and reporter code. Communication between the CLI and supervisor is assumed to go through STDIN and STDOUT so no need to lose your hair on weird platform-dependent issues with inter-process-communication (IPC) going through named pipes. The CLI program, if asked to run the tests, performs the following actions.

To find all tests, we perform a small trick, depending on kernel code (compiled elm code to JS). First we parse all the tests modules to extract all potential Test exposed values. Then in the template file Runner.elm we embed code shaped like this (but not exactly).

This template file gets compiled into a JavaScript file Runner.elm.js, on which we perform the aforementioned kernel patch. The patch consists in modifying all variants constructors of the Test type to embed a marker, and modifying the check function to look for that marker.

Once all the JavaScript code has been generated, it is time to start the supervisor Node file, which will orchestrate tests runners. The supervisor and the runners communicate through child and parent worker messages. The reporter is just loaded from its compiled elm code by the supervisor. Communication between the Elm and JS parts are done through ports, as usual.

The Elm package containing the code for runners and reporters is mpizenberg/elm-test-runner. 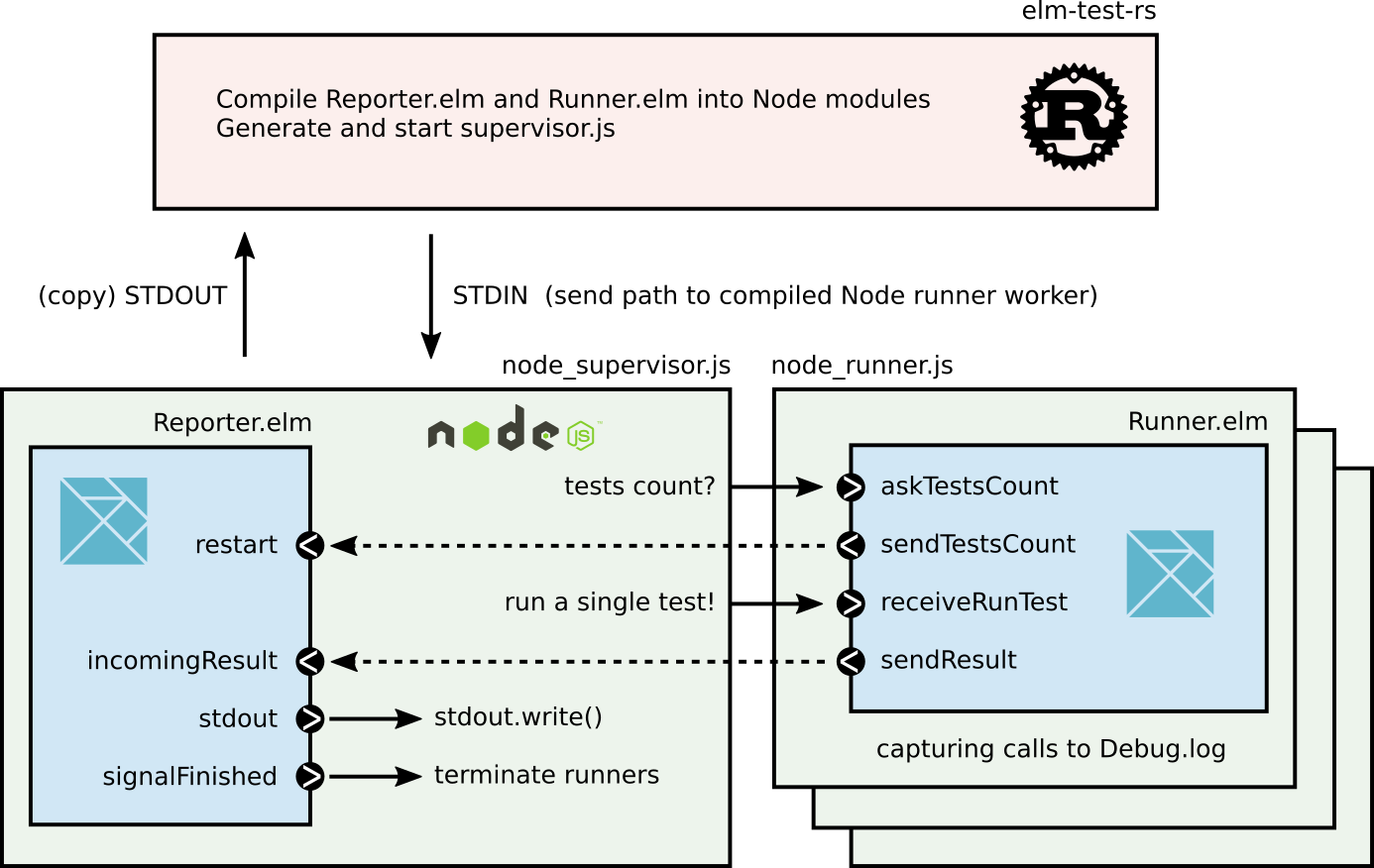 Contributions are very welcome. This repository holds a submodule so make sure to clone it recursively.

To build the elm-test-rs binary, install Rust and run the command:

The executable will be located at target/release/elm-test-rs.

This project also uses rust format and clippy (with its default options) to enforce good code style. To install these tools run

and then before committing run

PS: clippy is a rapidly evolving tool so if there are lint errors on CI don't forget to rustup update.