Photometric stereo infers the 3D-shape of a surface from a sequence of images captured under moving lighting and a static camera. However, in real-world scenarios the viewing angle may slightly vary, due to vibrations induced by the camera shutter, or when the camera is hand-held. In this paper, we put forward a low-rank affine registration technique for images captured under unknown, varying lighting. Optimization is carried out using convex relaxation and the alternating direction method of multipliers. The proposed method is shown to significantly improve 3D-reconstruction by photometric stereo on unaligned real-world data, and an open-source implementation is made available.

In the animation above, we show a close-up view of the same image region in 6 successive photos of a surface under varying lighting. On the left, the original images are slightly misaligned. On the right, the registered images by lowrr are perfectly aligned.

The algorithm presented here takes advantage of the fact that well aligned sets of images should form a matrix with low rank. We thus minimize the nuclear norm of that matrix (sum of singular values), which is the convex relaxation of its rank.

This algorithm gives convincing results in the context of photometric stereo images, which is where we have evaluated it, but it should also work reliably in other situations where minimizing the rank makes sense. Some additional experiments show interesting results with multimodal images for example. 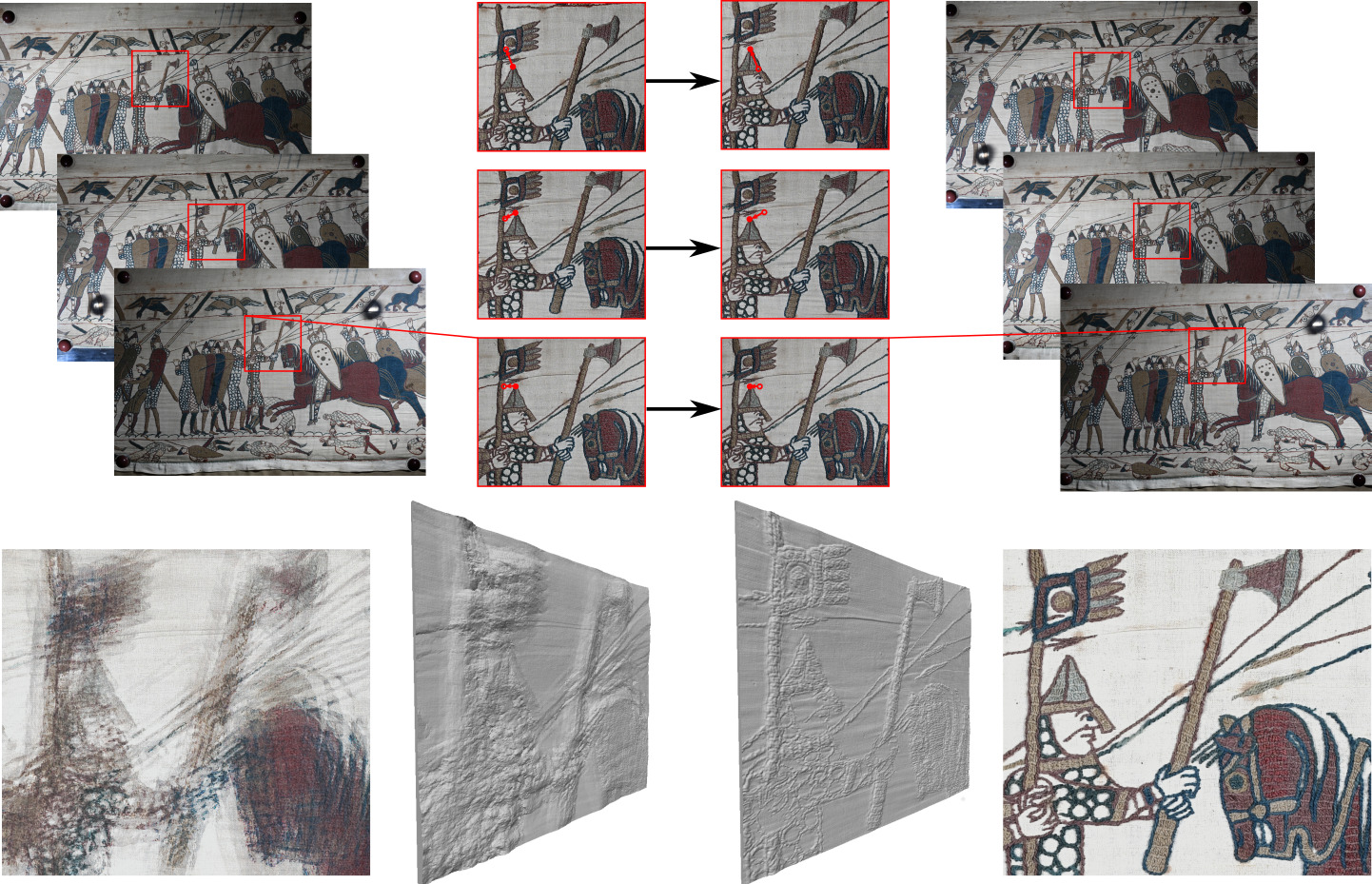 The previous figure showcases the improvement on both the 3D reconstruction, and the recovered albedo after an alignment of handheld photometric stereo images of the Bayeux Tapestry.

This work was supported by the RIN project "Guide Muséal", and by the ANR grant "Inclusive Museum Guide" (ANR-20-CE38-0007). The authors would like to thank C. Berthelot at the Bayeux Tapestry Museum for supervising the image acquisition campaign of the Bayeux Tapestry.

To install the lowrr command-line program, simply download the archive for your platform (Windows, MacOS, Linux) from the latest release. Then extract it and put the executable in a directory listed in your PATH environment variable. This way, you will be able to call lowrr from anywhere.

The simplest way to use lowrr is to call it with a glob pattern for the images you want to align, for example:

By default, this will compute the registration and output to stdout the affine parameters of each image transformation as specified in our research paper.

If you also want to apply the transformation and save the registered images, you can add the --save-imgs command line argument.

Usually, the algorithm can estimate the aligning transformation without working on the whole image, but just a cropped area of the image to make things faster. You can specify that working frame with the command line arguments --crop <left> <top> <right> <bottom> where the border coordinates of that frame are specified after the --crop argument (top-left corner is 0,0). In that case, I'd suggest to also add the --save-crop argument to be able to visualize the cropped area and its registration.

You can also customize all the algorithm parameters. For more info, have a look at the program help.

This command will load the 6 images into memory and extract a working area corresponding to the 500x500 frame located between left, top, right, bottom coordinates of 2300, 2300, 2800 and 2800 respectively. It will then perform the registration algorithm on that working area with default parameters and save the registered images for that frame. Finally it will project the computed registration parameters from the cropped area to the frame of the whole image and output those into the file params.txt. Each line of params.txt contains the affine parameters p1, p2, p3, p4, p5, p6 of the corresponding image, such that they form the following affine matrix:

In addition this also apply the computed registration to all images and save them on disk. All saved images will be located in the out/ directory.

In addition to the lowrr executable compiled from lowrr-bin/src/main.rs, we also provide the code in the form of a library, so that it can easily be re-used for other Rust applications. The API documentation of the library is available at (stale, todo: change location) https://matthieu.pizenberg.pages.unicaen.fr/low-rank-registration

If you want to read the source code but are not very familiar with the Rust language, here are few syntax explanations.

Basically, if you know how to read C/C++ code, the structure of Rust code should be pretty familiar. For example, it uses curly braces to delimit code blocks and the parts between brackets <T> are type parameters, like templates in C++.

Here are code examples of some patterns and syntax that may be new though.

The first pattern is the usage of "closures", a.k.a. "anonymous functions", a.k.a. "lambda functions". The part between the bars |x| are the arguments. The part after the bars x * x is the returned value. Closures are useful to use instead of defining properly named functions in some parts of the program.

The second pattern (.iter().map(...)) is basically saying that we are iterating over a collection of things and we apply the same function f to all those elements of the collection. The collect() at the end is more or less saying that we are done modifying it in this iterator, and we can regenerate a new data structure that will contain the result of those modifications.

The third pattern consists in using iterator1.zip(iterator2). It is just to bring together two iterators and apply a function to both elements at the same time.

Pattern 4 is another way of iterating, similar to pattern 1. Depending on the situation, using loops or mapping a function will be more appropiate.

Finally, the usage of unwrap() or expect(...) is just to say to the compiler that I know it is safe to extract a potentially failing value even though it may result in an error. In the case of an error, this will crash the program, and print the message inside the expect(...).

To compile the source code yourself, you just need to install Rust, and then run the command cargo build --release at the root of this project. Cargo is Rust build tool, it will automatically download dependencies and compile all the code. The resulting binaries will be located in target/release/. The first compilation may take a little while, but then will be pretty fast.

To build the Web application, follow instructions in lowrr-wasm/README.md and then in web-elm/README.md.

Warning: this has not been tested on Windows and Mac, only Linux.

First, you need to build the lowrr and warp-crop executables.

These two executables will be located at target/release/lowrr and target/release/warp_crop respectively. Copy them somewhere in your path to have them available when we run the Matlab scripts.

Now you need to download the DiLiGent dataset and extract it. We are interested in the pmsData/ directory containing photometric stereo images of 10 objects.

The eval/ directory in this repository contains two scripts eval_registration.m and eval_all_displacement_errors.m, as well as some helper functions for each of those scripts. Once the DiLiGent data has been downloaded and extracted, Change the path of diligent_dir in eval_registration.m, eventually also lower the nb_random constant to something small, and run the eval_registration Matlab script.